In a world that never seems to slow it’s pace, a solid night of sleep fuels us to keep up. Learning how sound machines improve sleep can be the key to powering through for many of us. 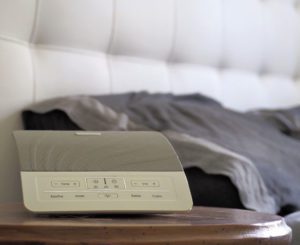 From phone notifications to dogs barking, babies crying, and horns honking, somehow in our modern society, silence has gradually become the exception rather than the rule. We’re quite accustomed to it.

Since the birth of the internet and the explosive growth of social media use in recent years, there are no signs of slowing down. Ironically, in today’s world, silence renders most people restless. When left to one’s own devices, chances are in the 21st century, if you’re waiting for a friend at a bar or coffee shop, nine times out of ten, you’re either checking your email or scrolling through social media. Sitting in silence with one’s thoughts seems like cruel and unusual torture.

Humans crave connection, but when the backbone of our modern society relies on unlimited communication and instant availability, often at the expense of our health and wellbeing, it’s no wonder we’re exhausted, irritable and stressed.

How on earth can we hit the pause button to allow our brains to rest and rejuvenate if silence isn’t even part of the equation?

The History of Sound Machines

Identified by engineers in the early 1920s, white noise is the sum of all audible frequencies randomly combined into a “steady sonic stew” of noise-reducing sound, which to us sounds like static. Analogous to the light spectrum, in which the combination of all colors into a single beam creates white light, when the sum of all audible frequencies is combined, a rumbling or hissing sound is detected. One article describes it in layman’s terms best: “Imagine [white noise] like hundreds of musicians playing every single note you can hear at once at the same volume.”

But it wasn’t until nearly 40 years later, in the 1960s, when the first sound machine was sold commercially for in-home use, specifically to help with sleep. A traveling salesman, Jack Buckwalter, discovered his wife had difficulty sleeping at home without the rumble of motel air conditioners and fans she’d grown accustomed to on the road. Like a good husband, he worked to solve his bride’s dilemma, concocting a contraption of random household objects to recreate the sleep-inducing sound his wife couldn’t sleep without using a fan, turntable, and a metal dog bowl surrounded by insulation.

He didn’t know it then, but in his quest to solve a simple household problem for his betrothed, he instead gave birth to more than a billion-dollar industry: personal sensory sound devices, an extension of the self-care industry. Today, his invention is known as the Marpac Dohm. 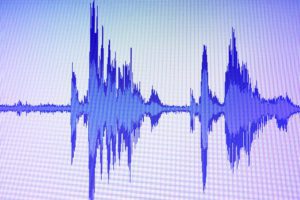 And while certainly not sleek or sexy, what the unaltered mushroom-shaped design from the 60s lacks in form, is more than made up for in function. Even today, the Marpac Dohm is the gold standard of sound machines. Initially designed for personal in-home use as a sleep aid, professionals began to see the benefits of sound machines, too. Most law practices, therapy and doctor’s offices, banks, and other environments when confidentiality is of the highest importance widely utilize variations of white and pink noise.

The thing is, what most of us think of as white noise is in fact, pink noise. Dohm acknowledges that their signature product (that started the white noise revolution) is, in fact, NOT a white noise machine. The fan-based “sound conditioner” actually creates pure pink noise.

What is pink noise and is it really better for sleep?

Just like the spectrum of light, sound waves follow the color spectrum. Pink noise is a variation (or cousin) of white noise with the “bass” turned up, producing a deeper, more rumbly sound.

White noise is similar to higher-pitched radio static. Pink noise is the lower-pitched counterpart: a hum or “whooshing” of air from a fan or air conditioner. Gentle sounds found in nature like the rumbling of leaves, waves on the seashore, the methodic drum of a heartbeat, and rain shower, are also on the same lower-pitched pink noise frequency.

To listen to the difference of each, hop over to this article.

From an evolutionary perspective, sleep is dangerous. Without a watchful eye to ward off potential predators to initiate a fight or flight response for survival, slumber essentially positions prey like a sitting duck.

Since rest is required to survive, during sleep, the human brain continues to sort out sounds, differentiating from the alarming, get-out-of -bed-there’s-an-intruder noise to the far less predatory (but still annoying), snoring of a bedmate. For some, the noise threshold for arousal from sleep is much lower than others. And, depending on where one land in the sleep cycle determines the susceptibility of waking to sound.

White and pink noise help improve sleep by reducing the ability to hear sounds that would otherwise wake a sleeping person. In recent years, researchers have discovered the superiority of steady pink over white noise, promoting deeper sleep and enhanced memory. In one study by the National Sleep Foundation, people who listened to pink noise during sleep performed three times better on memory tests than they did after nights without listening to the sounds. According to  Cleveland Clinic sleep expert Michelle Drerup, pink noise reportedly increases brain wave activity during deep sleep. Scientists believe this is the reason memory and sleep quality are improved, but more research into pink noise is needed. Still, pink noise is promising.

Scientists also believe pink noise is perhaps considered the earliest sounds we hear in the womb: the heartbeat of the mother, the whooshing sounds of fluids pumping through the mother’s body, the muffled sounds, and voices from the world outside. It’s no coincidence then, that newborn sleep experts and coaches strongly recommend the use of noise-reducing, sleep-inducing sound machines.

With all the noise machines, apps, and gizmos touting the advantages of white or, more accurately, pink noise, it’s easy to be overwhelmed by the myriad of sound machine choices.

How do you know which sound machine is right for you?

Truthfully, whichever is most calming to you.

For babies, opt for a fan-based sound machine, which houses a small internal fan, creating (rather than replicating or imitating) pure pink noise.

Make sure that it:

Some baby sleep experts believe the nature sounds of some sound machines are useful; others think they’re distracting. Most sleep consultants will suggest the non-nature sounds as an excellent place to start.

Electronic devices and apps have come a long way, and are great for travel and temporary purposes, but if better sleep is what you’re after, opt for machines or apps offering the more muted, hushed “pink” noise or nature sounds rather than the labeled white noise.

It seems then, the antidote to disruptive sound is counterintuitive at best: add (pink) noise.