When does an anniversary stop being an anniversary? Divorce? Death? Do those events erase everything that came before? No, I don’t think so.

Thirty-two years ago, we stood together under a chuppah (marriage canopy). So many of the people we cared about came out that day to watch us join our lives. It was Tu B’Shvat, a Jewish holiday that celebrates the birthday of the trees. The rabbi spoke and mentioned what a perfect day it was to plant a tree. I listened and prayed that he was right. 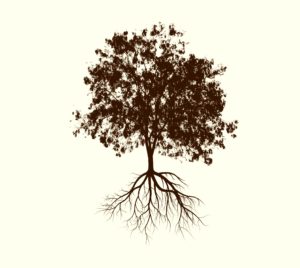 I don’t think it matters that the tree eventually had to be cut down. The trunk and all of its branches are gone, but the roots still live underneath the ground. Pieces of it remain. Poison may have attacked that tree, but at one time it stood tall and proud.

There is so much I regret about all of those years. But, if I’m honest, there are things I am grateful for too. Chaim, Malky, and Emuna. They are the fruit of that tree. I look at their faces, and I know that nothing could make me regret them. They are certainly not mistakes. Each one was wanted, cared for, and loved. Each of them is a product of each of us. Each one of them has added meaning and depth to my life. Each one came with their own sets of lessons to teach. Each had their challenges, and each had their triumphs. Chaim grabbed my heart, Malky touched my soul, and Emuna became the reason for it all.

It is true that our marriage ended. But that does not negate the fact that many years before that, it had begun. Divorce, even death, can not change the fact that the wedding took place. It doesn’t mean that we never got married. It doesn’t take away the fact that at one time we had a reason to celebrate.

There are so many things in our lives that could be either a blessing or a curse. It just depends on how we choose to look at it.