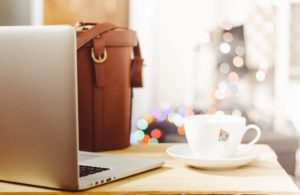 …that is the question that every new mom or mom-to-be asks herself, her partner, her girlfriends, and even the internet (is there anything we haven’t googled?). And SPOILER ALERT: there is no one “right” answer for everyone. So, why bother trying to write about the struggle? Because hearing from other mamas who have wrestled with this issue gives us comfort that we are not alone, creativity in how to craft our own approach to motherhood, and permission to leave the guilt behind! So, here’s my story:

I had a full-time job as a litigation attorney when I was expecting my first child, and I fully intended to go back to work after he was born. It was a demanding job that required a 40 hour+ work week, but I liked it well enough to try and make it work. Baby came and eight weeks later, back to work I went. And literally on the first day of working motherhood, I was confronted with the first of many working mom dilemmas — how late should I stay at work? Too early and everyone will write me off as not being dedicated to this job. Too late and the daycare workers will think I’m a bad mom (or even worse, I’ll have to pay the $1/minute late fee). My initial solution of leaving at 5pm and slogging through traffic to arrive at daycare by 5:30 was no bueno, as my partners noticed and noted my “lack of commitment” on my annual review. Thus, I was essentially placed on the “mommy track” at work, and I decided that although unfair, I was okay with it.

Fast forward 2.5 years, and I was expecting my daughter. In that time, the grind of balancing work and home was getting to me, and my supervisors’ tolerance was growing thin. So much so that I had actively started pursuing other jobs that I felt might provide more job satisfaction and less guilt. I was having no luck in the search and started to question my choice of career, because when I looked around to see if other working moms had it “better” than me, I hadn’t found anyone. So, I started entertaining the idea of becoming a stay-at-home mom.

My husband and I ran the numbers and determined that with a some adjustments, we could live off of his income and could afford to add me to his insurance. We also decided that our 2.5 year old son would remain in his preschool part-time, because I (accurately) predicted that I wouldn’t last long with both kids at home 100% of the time. So, baby no. 2 came, and home I went.

I immediately felt relief, even in the haze of newborn life with a toddler to boot. It was summer and we went and did all of the things that I had previously envied my non-working mama friends for. I had one-on-one time with my infant daughter when my son went to preschool twice a week, and we had the flexibility to run errands during the week and go to our favorite spots (The Zoo, Magic House, etc.) during off-peak times. Then summer ended and it seemed like the entire city went back to school, and being at home with my kids wasn’t as great as I had thought. I was bored, frustrated by no adult interaction, and I realized how few stay-at-home moms I actually knew.

So, a mere four months after quitting to become a stay-at-home mom, I began entertaining the thought of getting back into the workplace somehow.  Around the same time, I learned my church was searching for a new, part-time executive assistant for the lead pastor. It sounded like a great solution: a part-time, casual work environment in which I could basically set my own hours for an organization whose mission I already knew and loved, AND it paid enough to cover daycare and a retirement contribution, with benefits.

3.5 years and another kiddo later, and I’m still loving the flexibility and meaning that I’ve found in this role. Was it ever my plan to go from litigation attorney to executive assistant? No. Do I see myself retiring as one? No. For now, this arrangement works for me and my family in our stage of life. Don’t settle for a poor fit. Think outside the box, don’t be afraid to change your mind, and leave the guilt behind. Life’s too short!