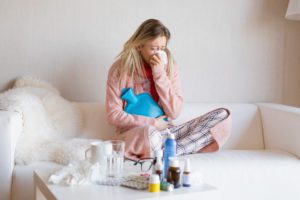 A few weeks back, I came down with a classic respiratory bug. A handful of times per season, this superbug camps out in my body and always overstays its welcome. The typical course is seven days of a sore throat, followed by a sinus system revolt, topped off with an incessant cough that loiters for weeks. But for this season’s special edition, I also experienced about four days of laryngitis. It wasn’t just typical hoarseness and not just the proverbial “frog in my throat.” I would open my mouth, but could not produce sound. It was surreal. Occasionally I could eke out an awkward prepubescent squeak, but usually, nothing more than a faint whisper would emerge. While this symptom is not atypical, I was entirely unprepared for how challenging it would be to parent without a voice.

Until my vocal cords went on medical leave, I never realized just how much I relied on raising my voice and (ok, I admit it) yelling to manage my boys. I never thought of myself as a yeller. While I am human and lose my cool with my kids more often than I care to admit, I do make a conscious effort to attach “pleases” to all of my daily commands, followed by “thank you’s.” I try to take deep meditative breaths before reacting to brotherly quarrels and shenanigans. However, I found that even when I am using a pleasant tone of voice while ordering my boys to “put their shoes on” and repeating “please” fifteen times, I am still doing so at a volume level that can only be characterized by “yelling.” 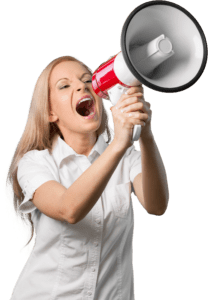 During my first day without a voice, I encountered multiple failed attempts at shouting after my boys as they sprinted through the house. Every time I wanted to give directions, I found myself silenced. Each time I needed them to load up for school, I opened my mouth to shout across the house and quickly remembered that I had lost this supermom power. As I sat mute with my box of Kleenex and listened to the bathroom wrestling match unfold, I started to wonder if the ability to yell was a “super” power after all. While I was frustrated that I had temporarily lost my primary tool for managing the household, I was also stunned by the epiphany that I was a max-volume mama. So rather than screaming from the bottom of the stairs that it was ten minutes past bedtime and pajamas had better be on, I was forced to climb the stairs and enter the bathroom wrestling ring. There was a toothbrush in the toilet, globs of green toothpaste on the mirror, and my six-year-old was in tears. Once again, I opened my mouth to express frustration but instead had to scramble for other methods. I diffused the situation with a lot of eye contact, a gentle but firm touch to separate my mini Hulk Hogans, and softly whispered admonishments and directives. To my astonishment, my little guy’s tears dried up, and big brother didn’t yell back with his typical sass. They both seemed to be transfixed by the calm that I exuded. 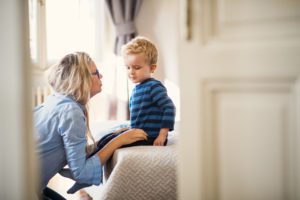 As my voiceless days persisted, I noticed that this calm continued. While it took more mindfulness and physical effort, I was pleased by the way my boys responded when I whisper-talked to them and got their attention with a gentle touch and eye contact rather than shouting. They had to listen carefully when I needed to speak and had more empathy for me and the fact that I was not feeling my best. And since I couldn’t continually run my trap, I was forced to slow down and truly listen to them. The less I talked in our conversations, the more they shared. While I was certainly happy when my voice returned, those sick days taught me a valuable lesson about my parenting style. Now I can’t say that our household is a hushed sanctuary, though I am trying to channel “laryngitis mama” whenever things get crazy.