Preschool is a decision that can confound us as parents. Do you send your child to preschool or keep them home? Which preschool is right for your child? How many years of preschool should they have before kindergarten? 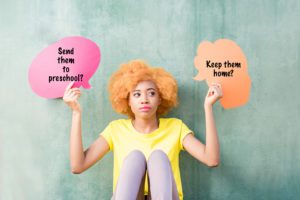 Reading Up on Motherhood

During pregnancy, I read everything I could to prepare for the life change ahead of me. Pregnancy insomnia led me to mommy websites, and late-night orders on Amazon introduced me to The Girlfriend’s Guide to Pregnancy, What to Expect When You’re Expecting, and What to Expect the First Year. With all of that research, do you know what I didn’t expect? That my decisions as a mom would be clouded by guilt rather than eased by the knowledge I had gathered.

When my oldest was three, whether to send him to a mom’s day out or preschool weighed on me. My friends were sending their kids, and my nieces and nephews were enrolled. However, as a stay-at-home mom, I put a lot of pressure on myself to be everything and do everything. I didn’t know that I wanted to stay home with my kids until I had them, and I wrestled with a ridiculous amount of guilt over the fact that I wasn’t working and didn’t contribute financially. Logically I knew I was contributing in other ways. Still, I created a haze of guilt that I intentionally huddled under throughout those first years as a stay at home mom simply because I felt like I was supposed to be doing more. I felt guilty for wearing yoga pants every day. I felt guilty for napping when my babies napped. You name it, and I felt guilty about it.

However, when I got first got pregnant, the school where I was teaching closed, so while one door was firmly closing, the chance to stay home naturally opened up to me. My husband was quick to let me know that the decision was ultimately mine because he knew that staying home would impact me more than him, and if I chose to go back to work, it would emotionally affect me in ways he wasn’t wired to comprehend. Because the choice to stay home was mine, when I considered the cost of preschool, and the fact that I was home all day, it didn’t make sense to send my kids.

Other factors that played into my decision were that I had taught kindergarten and first grade. I knew what was needed to be ready for elementary school. My kids also have cousins . . . lots of cousins. So there were playdates. I joined a MOPS group with my oldest two and signed up for soccer, music classes, and playgroups. We practically lived at the library and the Magic House.

I was ticking the boxes. A stay-at-home mom who is available to be with the kids? Check. Academic enrichment? Check. Socialization? Check. Once I checked each box, preschool didn’t seem as necessary.

While guilt ruled my decision, it was by far the right choice for us. I loved that I was able to spend so much quality time with my kids before kindergarten. Even though I had taught many others, watching the spark ignite in my kids as they learned their letters and colors, and eventually how to read was mind-blowing. Being their first teacher was a humbling privilege.

We did end up enrolling my oldest in a year of preschool before kindergarten because, with a late birthday, we opted to hold him back. Since he was going to start school later than his friends, going a couple of days a week was an easier decision to make. However, I don’t even have to tell you how many ulcers I got each month as I paid tuition. I second-guessed myself every time because I wrestled with the fact that he didn’t need to go to preschool and questioned whether holding him back was even the right choice. I found it so challenging to make a decision that involved the kids without always wondering how I was screwing them up.

And, of course, not sending my kids to preschool came with a few pitfalls. My kids struggled in kindergarten with basic concepts such as raising their hands or walking quietly in line. They were used to being the center of attention or close to it, and that was a bigger adjustment than I expected. I’m sure the separation was harder for them since they weren’t used to leaving me every day; it was exquisitely rough on me to let them go. It was so worth it, though, to have those years with them. Sometimes, I gaze at my 16-year old and in a flash, I am knocked breathless by how quickly he went from needing a booster seat to having a license; symbolic of how he used to enjoy being around me all day long, contrasted by his current need to be off on his own.

Keeping Them Home Worked for Us

Acknowledging that parenthood can be heavily laced with guilt, keeping the kids at home until after they turned five was the right decision for our family. It is as though every step we took towards having kids forged a unique path that led to keeping the kids home with me.

Looking back, I wish I hadn’t let so much guilt and emotion cloud my decisions, but I’m a mom, so that comes with the territory. If I could go back, I’d make the same choices, but I’d let myself enjoy them more. Motherhood grants an innate ability to juggle, allowing us to wallow in a pit of guilt while simultaneously floating on a continuous high. Two of my kids are now in high school, one will be off to middle school next year, and my youngest is in first grade. While the preschool years are long gone they were pure gold, and their value steadily increases with each passing year.