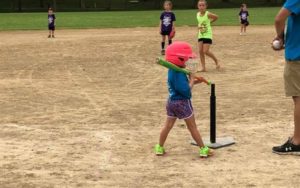 This summer was the first summer my daughter was able to play t-ball. We are a primarily baseball watching family. My husband is a huge Yankees fan. We can’t really blame him for that though since he’s from Connecticut and does reserve love for the Cardinals. Of course, my St. Louis native self is a huge Cardinals fan. We did watch a lot of Blues Hockey this spring for good reason. Let’s Go Blues! Anyway, it was a given that when our daughter was old enough, if she wanted to, we would sign her up for t-ball.

Her coach contacted all of the parents saying that they would have two practices and then six games. As a millennial, I grew up watching parents take their kids’ “sports careers” way too seriously from a young age. I was worried that this may get a little bit more intense than it needed to be. After all, they are 5, not 15. They just need to have fun and get used to batting, fielding and running the bases. They played three innings. Every kid got a chance to bat and there were no outs. I was pleasantly surprised that the coach was super chill and that the parents followed suit. Parents helped by standing out in the field and made sure the kids saw the ball coming at them. The parents cheered on all of the kids. We even cheered on the kids from the other team.

Also, let’s be honest, 5 year olds playing t-ball are somewhat hilarious. My daughter has a huge helmet and when she is running the bases it bounces all over on her head. One time she stopped a ground ball, held it straight up in the air and shouted, “I got it.” We were all laughing and shouting, “Throw it to first!” Sliding into home plate as a five year old also provides a lot of entertainment for the parents.

Overall, it was a fantastic experience for our daughter and for us. We got to know the other parents around us, our daughter made new friends and she had a great time learning a new sport. I was mostly happy to see good sportsmanship from age 5 to age 35. Parents and children having a great time and cheering everyone on. As long as she enjoys playing on the diamond, we will be right there cheering her on.