As Halloween approached this year, I fielded lots of questions about the creatures and critters that haunt the season.

Who is Frankenstein? Are vampires real? What’s a zombie?

I am quick to quell all the fears as my inquisitive boys stare at the spooky decorations in Target.  Of course they’re not real, Sweetie.

And when their rational brains surge into overdrive, I’m prepared with even more elaborate answers.

But we saw real mummies at the art museum, right?  Can a dead person ever come back to life?

It’s relatively easy to walk them through the straightforward logic that defies the existence of monsters and ghouls, but I get tripped up when this same onslaught of curiosity turns to Santa Claus and the Tooth Fairy.  My seven year old has been dropping teeth like a rotting jack-o-lantern and the premature decking of the halls in every store has ensured that these dreaded direct questions will arise again and again: 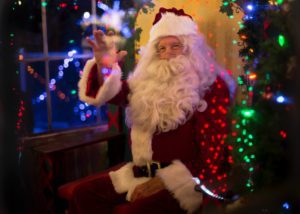 I’m sure many of you have already experienced this peculiar parental rite of passage: the moment when your moralistic desire to impart truth and wisdom to your children goes to war with your maternal instinct to preserve their innocence and extend their childlike wonder.  These colliding forces can cause quite a ruckus in your mama heart and in most cases, you only have a matter of moments to choose which battalion you will join.

Strategy One: You lie. You answer their queries with a quick retort powered by strong assertive exclamations like “Absolutely!” and “Of Course!”  Your conscience begins to shiver with uneasiness at the blatant prevarications spewing from your mouth, but you quickly quiet the guilt with alluring tales of magic and mystery.  This was my first line of response and it is the fun and friendly way to beat down your child’s maturing sense of reason, but I’ve found myself getting backed into a rhetorical corner at Halloween time.  I’m basically arguing that magic is beautiful and wonderful and only real when used to deliver happiness and fun.  A jolly fat man can certainly fly reindeer and sneak down our chimney with gifts, but a bat that turns into a blood-sucking vampire makes no sense at all, Honey.

Strategy Two: You tell the cold, hard truth. We can’t ignore this opposing extreme on the strategy continuum.  This was the philosophy that my own parents embraced, and as a result, I don’t recall believing in Santa or the Easter Bunny for very long.  As parents of an only child, they operated with this maxim: If she’s mature enough to ask the question, she’s mature enough to get the answer.  While my parents’ honesty certainly fueled a relationship of trust and encouraged my critical thinking, it quickly catapulted me through the blissful phase where imagination reigns supreme.  So onward I quest for a more temperate tactic. 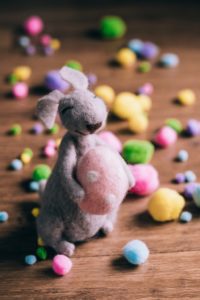 Strategy Three: You fight the fire of direct questioning with a soaking spray of ambiguity.  This qualified and more complex strategy may require some forethought.  My recent go-to has been to answer the question with a question: Well, what do you think?  With this simple evasion maneuver, I’m able to ride out the battle in neutral territory and avoid wounding their inquisitiveness and their imagination.

Even when my boys were toddlers uttering broken demands and chewing on board books, I used questions as brain fuel.  What do you think the Runaway Bunny will do next?  Where do you think the choo choo is going?  In this current conundrum of faith and magic, this Socratic approach encourages their little brains to fire away at the logic (or lack thereof) while simultaneously nurturing their sense of wonder.  It invites them to believe in the magic they want to imagine, and leave the ogres and goblins out of it. The fantasy is more vibrant when it is sorted with their own logic and it allows me to relinquish my authoritative role as the all-knowing parent.  Sweetheart, I truly don’t know how Santa visits 7 billion kids around the world in one night. What do you think?