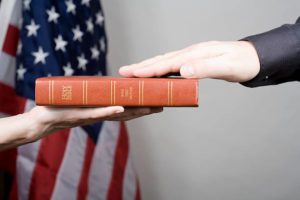 In one week I have to take the stand to testify against the mother of my foster children.  I’m trying to prepare myself.  Prepare myself to sit across from a woman and tell a judge of the horrors that I have heard, that were disclosed to me by five of her children, so that the judge can decide if her rights as a parent should be terminated – forever.  The gravity of this is not lost on me.

I have so many conflicting thoughts and emotions surrounding this event.  The anger I feel towards a woman who abused and neglected her children; the anguish I feel for the children who will likely lose their biological mother; the empathy I feel for a woman who is a product of her own childhood, which included abuse and neglect; and the hope I feel for a brighter future for these children.

What moderates the internal conflict I’m feeling is that my testimony is grounded in facts.  The lawyers will ask me questions and I will answer them.  I will repeat the stories the children disclosed to me over the past two and a half years.  The stories of beatings, neglect, and bizarre emotional abuse.  Stories from five young children who felt safe enough in our home to talk about the nightmares they lived through.  These disclosures were real.  The fear was real.  I don’t have to decide how bad children have to be treated for their parents to no longer be their parents.  I only have to relay information so that the children themselves do not have to.

Originally, the plan from the lawyers was to have the oldest two children testify about what they went through when under the care of their mother.  They haven’t seen or talked to their mother in over two years.  And they would have to sit across from her and tell a judge everything she did wrong as a mother.  Apparently this is what normally happens.  And I couldn’t think of anything worse for a child.  Children conflicted by love, trauma, abuse, loyalty, and anger.  I could not stand by and watch that.

Disclosing abuse and neglect when you feel safe and not judged can be healthy and cathartic.  Disclosing the same information under stress, in a room full of strangers and the woman who was responsible for the abuse and neglect can only inflict feelings of shame, guilt, and more trauma for a child.  Only in rare situations, for someone who has fully processed the trauma, could it be empowering.  But these kiddos are only in the beginning stages of healing.

Two days after the kids moved in, I was in the bathroom with the eldest combing lice out of her hair, and the stories just kept streaming out of her.  It took so much of me to keep it together, to listen empathetically and not break down in a fit of rage and despair about what they had gone through.  The bravery of this child, to open up about her family and about the shameful things that had happened to them, was inspiring.  And that was just the beginning.  A few weeks later, when she was curled up in a ball under my chair in the psych hospital’s waiting room, the real horrors came out.  Things she had never told anyone in her life.  Things people hardly ever heal from and definitely will never forget about.

These are the things I need to reiterate so that she doesn’t have to.  This will be the part I play in possibly tearing a family apart forever.  For good and for bad.

Removing the rights of a parent from his or her child is the second most serious thing a judge can do, following the death penalty.  It is no light matter and it has taken two and a half years of these kids being in foster care to get to this point.  I am very sure that I know how I want the judge to decide, and I hope, for everyone’s sake, that the decision made is quick and these kids can be on their way to finding permanency. For good.