This post is sponsored by the St. Louis Symphony Orchestra but all opinions about the experience are my own.

We in St. Louis are fortunate to have a myriad  of family events and opportunities to choose from on any given day. One such option I just learned about is the Saint Louis Symphony Orchestra’s (SLSO) Family Concert Series. I was lucky to attend one of the concerts with my girls last week, and it was really a treat!

The SLSO Family Concert Series offers three 45 minute concerts throughout the year, each on a Sunday afternoon. Their website describes these events as offering “a mix of fun, thematic orchestral music to engage and entertain children ages 5-12 and their families.” I have to say, they did not disappoint!

While the show didn’t start until 3:00 pm, the doors opened at 2:00 pm to provide families with an opportunity to visit the  Instrument Playground. Each section of the orchestra (woodwinds, strings, percussion, and brass) had a station at one of four locations around Powell Hall. Not only was it exciting to touch and try to play a variety of instruments, the locations allowed us to explore the beauty of the theater itself. 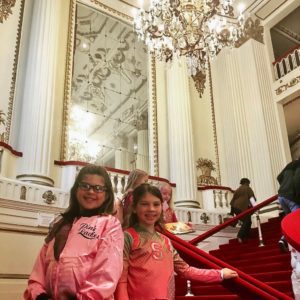 Bypassing the line that was forming just inside the door for the string instruments, we made our way up the grand staircase, stopping for a picture, of course, and headed to the third floor for the woodwind “playground.” Members of the SLSO volunteer organization took time with each child to explain how the instruments worked and taught them the basics of how to make sound come out. Only one of my two girls was able to make “music” with the clarinet and the flute, but they both loved being able to try! Don’t worry, not only did they have several mouthpieces available to keep the line moving, each mouthpiece was sanitized between each child. 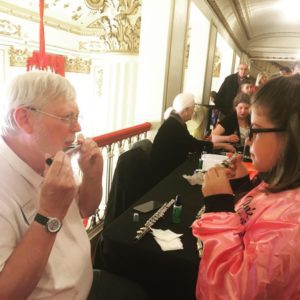 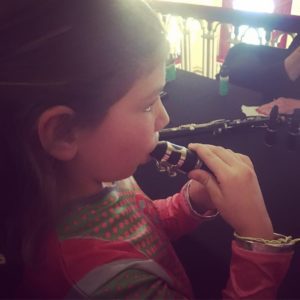 From there we made our way through the other parts of the instrument playground, noting the beauty of the light fixtures, the velvety handrails, and the seemingly secret hallways that led us to the brass instruments in the lower level. Finally, we arrived again in the main foyer and made our way to the concession stand.

Concessions of both the child and adult variety are offered during these concerts, which was a nice surprise. Pretty dispensers of pink lemonade enticed the children, and if the adults were interested in something stronger, coffee, espresso drinks, and a full bar were available. My kids talked me into candy, too, which was surprisingly less expensive than at the movie theater, so I happily indulged them. The best part about the concessions, however, is that they can be brought into the theater itself. Yes, you read that right. There are no rules about only enjoying your items in the lobby, and my children and I were all overjoyed at this news.

As showtime approached, some of the musicians came onstage to warm up, and this was a neat chance to walk right up front and watch them at their craft. For those that just wanted to make their way to their seats and enjoy the warm up notes, there was also a running display of musical information on a screen above the stage, suitable for children’s understanding. 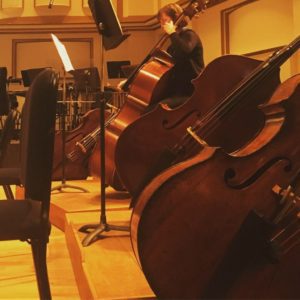 The real magic began once the full orchestra and conductor Lee Mills came out. They began with the lively Ritual Fire Dance from El amor burjo by Manuel de Falla, and followed that with Joseph Hayden’s Adante [Second Movement] from Symphony No. 94, also called “Surprise.” The entire audience was surprised, and even more entertained by Mills’ overly dramatic response to it. He was funny and engaging and seemed to genuinely enjoy sharing his gift with the kids.

The concert continued with a dramatic reading of Lemony Snicket’s The Composer is Dead, narrated by St. Louis native Omega D. Jones. Jones was brilliant in his interpretation, and the presentation of this book allowed the conductor and the entire orchestra to get involved in solving the whodunit. The audience laughed as the violinists tried to blame the cellists and bassists, who in turn tried to blame the violas, who were too timid to blame anyone else. And then the woodwinds, brass, and percussionists also denied being involved, and everyone in the theater was left wondering about the culprit.

The adults probably laughed more than the kids when it was revealed that the conductor was responsible for the death of the composer, over and over again, but the kids were so interested in the music and the interaction that they laughed anyway because it was all just so fun.

Right at the moment that all of the kids were probably about to run out of the ability to sit still and be somewhat quiet, the show finished with its final, magnificent number, and the audience erupted in applause.

I will absolutely be taking my children back to the family concert series. I love that it gives them a chance to dress up and practice their manners in public, and I love that it allows us to explore the beauty of the architecture and culture St. Louis has to offer. But most importantly, I love that, for a very reasonable price, my children and I are able to experience the joy of a live musical experience with one of the best and oldest symphonies around. 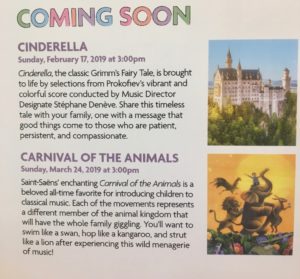 The SLSO Family Concert series continues with Cinderella on Sunday, February 17, 2019, and finishes with Carnival of the Animals on Sunday, March 24, 2019. Individual ticket prices range from $8 to $19. The SLSO does offer a 2-show package subscription for the remaining 2 family concerts. The subscription package saves up to 25% off full price and additional benefits as a subscriber – like saving 20% off any additional concert tickets purchased anytime throughout the season! I’ll look forward to seeing you there!