Growing up, there was never a year I didn’t give my dad a Father’s Day card. When I was really little, I’d make it out of construction paper and crayons. Later, I loved picking out cards from the Hallmark aisle in Walgreens, choosing the one that expressed just the right feelings—sometimes funny, sometimes full of sappy phrases about love and strength and generosity, and sometimes with those bad dad puns. But I always gave him the perfect card. 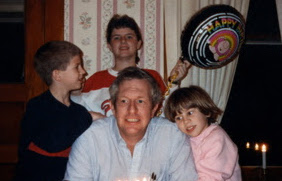 I was a daddy’s girl even after my parents’ divorce when I was 11. That was when my dad really became the fun dad–taking us to karate and restaurants and movies and then dropping us back off at home. It took me a while to understand that the fun was only one side of things; he also struggled a great deal. Over the next six years, there were plenty of times when he missed my games, forgot to pick me up for dance, or didn’t call when he said he would. But he was my daddy. I still loved him and always would.

My dad died three months before Father’s Day of my junior year of high school, and yet that year I bought four cards. The first three were for friends’ dad’s–Mr. Jayne, Mr. Ewing, and Mr. Lang–three dads I admired and appreciated. There were plenty of “For a Great Guy” cards that described their virtues of being handy, loving, and cool, and these great guys deserved them. The fourth card was for my mom. 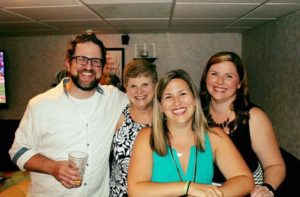 After my parents’ divorce, my mother held everything together at home, largely on her own.  And so while she was raising us and doing laundry and taking us to church and sports, she was also doing the typical dad things. When things broke, like the dryer or the toilet, my mom fixed them (without the internet!). Every spring she installed air conditioners and varnished the woodwork, and she mowed the lawn and trimmed the bushes with the scary electric hedge trimmer. She was at every game she could attend and at every single parent teacher conference. And she worked two jobs.

At the time I took much of this for granted. This is what parents do–they go to work, come home, cook, clean, repair, plant, build, wash, expect, and demand. I rarely considered the fact that most parents had someone to share the load, or that their jobs at home often divided along traditional gender lines. I also rarely considered the emotional role she played then. How even though she was being mother and father, she didn’t try to negate my father’s place. 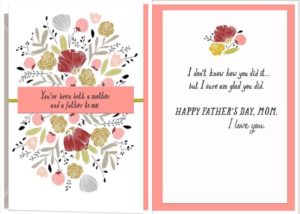 And now, as a divorced mother of two incredible girls, I understand more than ever the challenge of parenting without someone else right there, all the time. And so we celebrate her every May on Mother’s day, and since she too, is strong, wise, encouraging, and loving, like the cards say, she also earns her Father’s Day card in June. And finally, even Hallmark agrees.