My two daughters couldn’t be more different. (Yay for thinking I had this parenting thing all figured out only to have a new personality teach me I know nothing). My oldest has never met a stranger, just friends she hasn’t made yet. She will talk at length to almost anyone, from a new teacher to a kid at the park to the nail salon tech who just wants to paint her little nails and move on.

Way over on the other side of the personality spectrum, my youngest reserves the right to ignore conversation attempts from extended family members she sees all the time and teachers at her daycare other than her most favorite one. For a while, I thought it was the result of being a pandemic toddler, but as she grows, I’ve realized it’s just who she is. And, that is A-okay with me. So, well-meaning grown-up in Target who asked her about her dinosaur shirt and then stared at me expectantly when she gave you a side-eye and turned away, no, I won’t make my shy kid talk to you, and here’s why.

Introversion is Not a Flaw

In our culture, extroversion is seen as, if not the default, at least, the “better” way to be. I grew up as the anxious child who felt frozen in new social situations and also felt bad about it because it was “weird” to be that way. Now, as an adult, I know there’s nothing inherently wrong with enjoying my own company. Maturity (and anti-anxiety meds) have somewhat eased the fear of small talk with strangers, but I’d still rather be at home with a good book and still prefer to text with a friend rather than talk on the phone. My daughter is her own person, but I recognize some familiar traits in her and vow that she will grow up knowing it’s fine to be herself, even if the world around her says otherwise.

Shyness Doesn’t Have to be Limiting

A common worry parents express about their shy children is, “I don’t want them to miss out on things because of fear.” This worry comes from a wonderful place of caring, but I would reassure them that shyness doesn’t have to shut children off from new experiences. They will branch out when they’re ready. It also doesn’t have to stop us from offering our children new opportunities. Just be prepared to support them through it or pull back if it’s not working.

For example, when my older daughter signed up for indoor soccer, I also signed my younger daughter up for a trial class for her age group. Going in, I realized there was a solid chance she wouldn’t be into it, but that’s what trial classes are for, right? As it turned out, the big soccer field, bright lights, shouting voices, and new faces were too much for her. When it was time for the parents to move off the field, she froze. My spouse and I both talked with her, but she wouldn’t budge. At her request, we picked her up and moved to the sidelines. After a little while, she asked to leave, so we left. I told her anytime she wants to try again she can, and if she wants to do something else, we can do that instead. Her choice entirely.

Speaking of choice … women and girls, in particular, are conditioned practically from birth to be polite and deferential. Politeness is all fine and good until it’s not. Just as I teach my daughters, “Your body, your choice,” I want them to know that choice extends to protecting their sense of personal safety and comfort. There’s actually no obligation for them to have a conversation with a stranger if they feel uncomfortable. Right now, that discomfort might stem from shyness, but I want them to stay in tune with that inner voice in the future when it might mean avoiding a bad situation. They don’t owe anyone politeness over their own security. If that hurts a grown-up’s feelings, then oh well. They’ll manage. 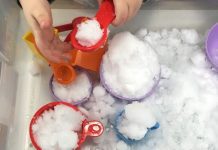