While I was pregnant with my first daughter, I dreamed about the bond my baby and I would have as we breastfed. “It’s tricky but you’ll get the hang of it,” experts and friend alike told me. I knew I’d also need a pump for when I went back to work, so after much research and deliberation, I ordered the Spectra S2. When the pump arrived, I stuck it in a closet and forgot about it. Fast forward a couple of months to my daughter’s birth when a combination of medical factors on her part and milk that was slow to come in on my part (like 12 days slow) created a perfect storm that made it seem like my breastfeeding dreams were not meant to be.

I remember sitting in the hospital with a well-intentioned lactation consultant who was showing me how maybe, just maybe my baby and I could learn to breastfeed if we could just use a nipple shield and drip some already expressed breast milk in her mouth with a syringe at the same time. When she saw the look on my face (somewhere between a sob and “are you even kidding me right now?”), she stopped, “You know, another option would be to pump bottles of breast milk for her.”

Exclusive pumping started off as a dubious experiment that ended up working for us. Good old Amazon Prime had a hands-free pumping bra and extra pump parts waiting for me by the time we arrived home. Those first days, I pumped faithfully every two hours for 20 minutes day and night to mimic the frequency with which a newborn might eat. I massaged. I ate lactation cookies, smoothies, you name it. At first, I was wringing out just barely enough to stay ahead of her appetite, and then one day, the flood gates opened. Mom’s Milk Bar was open for business.

I pumped exclusively for the first year of my daughter’s life, and my pump became like an extension of my body. At work, it sometimes felt like I spent more time in the “new moms room” than I did at my desk, balancing my laptop on my knees and trying to muffle the sound of the pump motor enough to take conference calls. On trips, Spectra and the car charger had to come too, not to mention all the supplies for storage and sanitizing. Even simple errands had to be scheduled around my schedule. 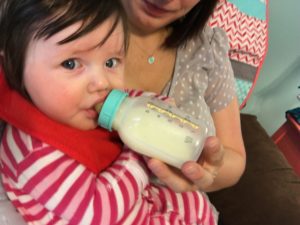 It was a long, very tiring year, but I felt so proud I had managed to give my daughter the nourishment of her mother’s milk, even if it wasn’t quite how I’d imagined it. As our pediatrician simply put it, “Exclusive pumping counts as breast feeding!”

Oops I Did It Again

Two and half years later, my second daughter was born, and I again intended to breastfeed. Surely this time would be different, after all, I was an older, wiser, more experienced mom this time around. Again, I was wrong. Baby 2 also had zero interest in drinking from the tap. If exclusive pumping worked the first time, maybe it could work again. I recalled with something approaching PTSD the added layer of complexity exclusive pumping caused, the extra time commitment, waking up at night to pump because *supply*. My mom guilt said that if I had managed it for my first daughter, I should at least try. It’s only fair, right?

This time, however, I’ve made some modifications for the sake of my sanity. While I started out pumping frequently to build supply, I did not maintain that pace for nearly as long. As maternity leave drew to a close, so did my middle of the night pumping. I keep a few meals worth of bottles in the fridge and a minimal freezer stash. My motto has been, I’ll do the best I can without making myself crazy in the process. 11 months in to my second exclusive pumping journey, that strategy has worked for us. Like her sister before her, my second is thriving and happy, and so is mama.

Not to say I’m not looking forward to the one year mark and saying goodbye to Spectra for good!