My son swears he loves his toys. But every week I find myself suggesting, begging, bribing or threatening him to actually use them. He mostly wants to do something involving screen time, which I’m told can be unhealthy for him in large doses. To break through, I usually remind him of his giant stockpile of toys and then watch as he tries to prove that he still loves them.

But now is the season of gift giving. We are blessed beyond measure with family and friends and he is likely to receive even more toys this holiday season. This year our challenge as parents is to balance graciousness with guided requests while also discouraging hoarding. Here is our strategy for this year! 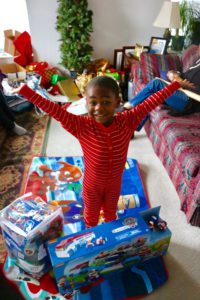 A few times a year we go through toys, games and books to determine which ones are no longer needed. We decide together, which ones should go directly to younger cousins or friends and which ones should go to our church or Goodwill. This year we will do this during the Thanksgiving timeframe to try to stay grounded in the spirit of the season.

Plan Gifts for Others

Quinn is now old enough to fully understand how gift-giving works. He enjoys planning the perfect surprises for people he loves. This year we plan to engage him even further in the planning, budgeting, purchasing, and in some cases, making of their presents.

Reflect on Favorite Experiences During the Year

Last year, we received annual memberships to some of our favorite museums, including the Science Center, Missouri Botanical Garden, and the St. Louis Art Museum. We also visited child-oriented spaces like Myseum, City Museum and the Magic House. Then there were special performances at the Symphony, Muny, Fox Theatre, circuses and other spaces that featured local or touring acts of particular interest. And of course there were countless parties at bounce houses, kid gyms and play spaces.

Each of these experiences represent a range of new gift opportunities. While some memberships or event tickets fell on the expensive side, almost all of them have low cost access points or supplements that can be meaningful. While one person took him to see a live show that was costly, another gave him binoculars that were useful on-site and remain part of regular play at home.

Help Them Redecorate Their Space

Much to my personal dismay, Quinn was deeply into a very age-appropriate, but incredibly commercial kids show when we transitioned his bedroom from toddler-hood to emerging big boy status. That means he has Paw Patrol bedding, rugs and decorations out the wazoo. As I suspected, he has since graduated to other interests and wants his space to reflect his growth.

As much as I would like him to make more timeless choices, I know that he would love to receive decorations featuring the characters he enjoys now. Even though my husband is edging him towards the Marvel Universe, he is currently deeply enamored with the painfully obscure Netflix series “Miraculous: Tales of Ladybug and Cat Noir.” Whoever manages to hunt down swag from this show will be the Christmas winner this year.

Quinn has a LOT of old standbys that he enjoys playing with regularly, including cars, marbles, legos, and planes. This year, he understands that he could get better use out of the ones he has if he got new things to use them with. In this case, that means he could use car and marble tracks, more lego build sets, and additional plane construction sets and maybe, finally, a drone.

He enjoys science kits (especially those involving slime) and classic games like Hungry Hungry Hippos, Uno, and Mousetrap. We are trying to lead him towards games that require strategy, with hopes of getting him into chess sometime soon. We also always keep age-appropriate flash cards, activity books and crayons handy for on-the-go use. These can usually be found for very low costs at major stores everywhere.

As much as we are trying to raise a thoughtful, gracious child, we also recognize that this really doesn’t have to be that complicated. For someone who genuinely wants to go the traditional route of just buying ‘something shiny from the toy aisle’ I hope that they know Quinn will be pleased with just about anything, after all it’s the thought that counts!