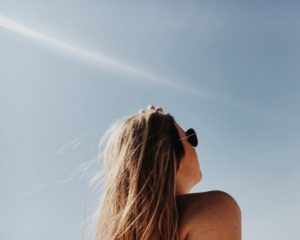 You may have a love/hate relationship with the freckles that cover your skin, but they’re harmless. When you’re covered with moles like I am, that’s a whole different story. May is Melanoma Awareness Month, and as someone who’s had a recent brush with it, I wanted to share my story to help bring awareness to this not-often-talked-about form of cancer.

I started seeing a dermatologist for skin cancer screenings because I have a family history of some other forms of skin cancer (that were not melanoma) and realized that it probably wasn’t a good thing that I was covered in dark, funny-shaped moles. I had a few atypical moles removed that turned out to be nothing and one nerve-wracking incident where a mole between my toes was turned over for a second opinion before being declared benign. But otherwise, all was well.

Last spring as my annual screening approached, I was nervous because the mole that was previously biopsied between my toes had grown back (and Google-ing ‘moles between the toes’ and ‘moles growing back’ were leading me to some very dark places). My dermatologist assured me it probably hadn’t suddenly grown back as cancer but also recommended complete surgical removal in order to put my mind at ease. As she was finishing up, she asked me about a mole on the back of my upper left arm. To be honest, it’s the back of my arm so it’s not like I’ve had the opportunity to notice it regularly, but I came clean and admitted I had no idea how long it had been there or if it had changed significantly. We decided to play it safe and do a quick biopsy since it was a relatively small mole ‘just in case.’

Fast-forward to a week later as I was preparing to leave on our annual family beach vacation, and my dermatologist called on a weeknight (uh-oh). She said the biopsy came back and showed early signs of melanoma, technically referred to as melanoma in situ (meaning that there was no evidence that it had spread beyond the top-most layer of my skin). It was a shock. She gave me permission to go ahead with the vacation if I promised to follow up with a plastic surgeon ASAP. Even though she had effectively removed the entire mole during the biopsy, protocol dictates wider margins when melanoma is confirmed.

Less than a month later, I underwent an outpatient surgery to remove the mole from the back of my arm, which left me with a two inch incision and lifting restrictions for the next few weeks (super convenient with three kids under the age of 7, but hey–it could have been a lot worse). Meanwhile, the removal of the mole between-my-toes became more of a priority given the recent diagnosis, but after being completely removed a month later, it turned out to be nothing more than just another abnormal mole (the recovery on that was hell though).

So what does that mean for me? First of all, I was lucky. It was caught early and was treatable with minor surgery and no other interventions. It also means frequent skin checks and biopsies. I started going every three months, and I just recently hit one year without any abnormal biopsies, so I get to scale down to every six months. I know that my risk of developing another melanoma is higher, so I’ve become even more religious about applying sunscreen, wearing hats and rash guards, and staying on top of my skin checks.

So, what should you know about melanoma? First, there is a myth about skin cancer that it can’t kill you, spreads slowly, and is not as “serious” as other types of cancer (‘don’t they just burn it off???’). Melanoma can and usually does spread and metastasize quickly, and while it can be devastating when left undetected, it is treatable when caught early.

Next, let’s talk skin checks. If you have a family history of melanoma or you are considered high risk (white, fair-skinned, burn easily, lots of moles, history of excessive sun exposure or use of tanning beds), you should go see a dermatologist ASAP and plan on seeing them annually. Skin checks are easy and not so awkward when you know what to expect. You’ll put on one of those super-flattering gowns (fingers crossed for the actual fabric ones) and a dermatologist will check literally every inch of your body from your scalp to down between your toes. It’s also a good idea to perform skin checks on yourself at home (and have a partner/loved one help you with those hard-to-see areas), so you can identify new or changing moles, but if in doubt, see the dermatologist — I’ve gone in for several moles that I was worried about that turned out to be harmless, but it was the one I hardly noticed that turned out to be trouble.

Here is generally what you should be on the lookout for:

Asymmetry (one-half of the mole doesn’t match the other)

Color (that is not uniform)

Diameter (greater than the size of a pencil eraser)

Finally, be smart about your sun exposure. There is still a lot that is unknown about how and why melanoma develops, but doctors know that sun exposure increases your chances. Stop worrying about your tan and make sure you are always wearing a SPF of 30 or higher when outdoors and stick on a hat/sunglasses/long-sleeves whenever possible. Not only will it save you from premature skin aging, it may end up saving your life.