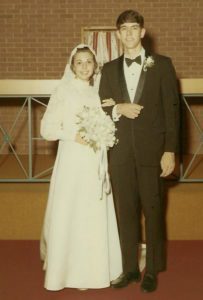 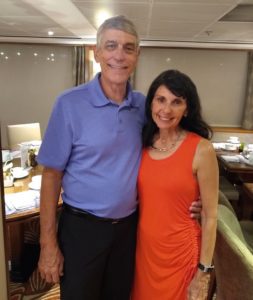 I adore my parents. I’ve always admired their marriage and what they mean to each other. They made (and make) marriage look so easy; so effortless. As I grew older, got married, started a family – I saw that marriage is NOT easy! It’s stinkin’ hard! (Can I get an AMEN?!) With 50 years under their belts, I asked my parents if they could pass on some wisdom.

How did you know Mom/Dad was The One?

Sue: After dating some and not liking one another, we ran into each other one day, smiled and started dating again. What I didn’t like before (thought he was a clown) I loved as we dated – his wonderful sense of humor.  As time went on, it registered; “Where have you been all my life?!” He loved, was considerate, warm and caring towards me and others. He was stable, secure, logical. Everything I wanted.

Ken: I’ve always said I only have one life to live. I decided that if that was the case, I wanted to go through it with Mom. When she left Mizzou to go back home to help her family, I went nuts without her.

What advice would you give couples going through hard times?

Sue:  Try not to think about a divorce or separation. If you need counseling, GO! (We did!) But through these hard times; talk kindly to one another, don’t curse and call one another names; respect one another’s boundaries; don’t throw digs and insulting comments. All of this will harm your relationship and you won’t get through the difficult time. Remember, you fell in love before these times! Stay in love during these times with kind, loving words.

Ken: You can’t lose sight of the big picture. Mark Twain had a great quote: “I’ve seen a great many worries in my time … and some of them even happened.”

Humor is another biggie. You have to have gallows of humor. Things can be so bad they’re funny!

Sometimes you just can’t compromise. The structure of the situation is either-or. So somebody has to know when it’s the right thing for THEM to give in this time around. You’ve got to be willing to do that.

You both came from different upbringings – how did you cultivate your marriage and decide what you wanted for our family?

Sue: We always joked: My mom ran my family and Dad’s dad ran his family, so we both wanted to run our family. We did go to counseling early in our marriage as having a healthy marriage and children was important to both of us. Because I came from a dysfunctional family, I read a lot on healthy marriages and family and continued counseling. Changes started happening because we both wanted to be married to one another and be functional. We always said: God wanted us to fight for our marriage. (My favorite book: “Traits of a Healthy Family”)

Ken: We were actually in agreement before we married about the big things: marriage, kids, religion, jobs, etc. We had more problems with how differently our families were run … That was really the source of our early issues. We both thought we got to run things. We were also at the opposite ends of the spectrum in terms of logic vs. emotion. So it was a matter of both of us moving more to the middle. Also, our opposite-ness helped us fill in each other’s weaknesses. By collaborating, we were much stronger/smarter as a team than as individuals.

How did you blend your parenting styles?

Ken: It was a continual fight … disciplinarian me, and softie Mom. But that was a good thing. The right approach was always somewhere in the middle. So we did a lot of selling and discussing about parenting … not always in agreement. Sometimes it was simply, “OK, we’ll do it your way and see how it works.”

The key to me is flexibility. What works with one kid doesn’t necessarily work with the others. So you can’t really be totally consistent like you think you should be. So parenting for us was a lot of strategizing, selling, and negotiating.

Sue: This was HARD! I am the softy and Dad was firm/disciplinarian.  We had to iron out when was it was appropriate to be softhearted and when to be firm. We had some battles, but we somehow balanced our style.

With 50 years under your belt, what is the one thing you would share with people?

Sue: Respect one another. Keep up with healthy habits. Keep loving one another in little ways.

Ken: Four things for me:

1. You both need to feel like you’re lucky the other person married you. You need to put each other on a pedestal.

4. Especially for men, you need a spouse that you can be totally vulnerable to, and know that it’s OK, that it won’t worry or scare the spouse. That was probably one of the biggest marriage gifts to me. I grew up pretty alone, taking care of myself after school, most closely connected to my sister, who went away when I was in Junior High and then died. Then my dad died. I always felt like I had no one to talk to. My Mom and I got along fine, but it wasn’t the same as man-to-man. I was pretty emotionally stunted. So it was a real unexpected luxury when I didn’t have to be alone any more. I could tell my wife anything, share anything, feel anything … and it was OK. I almost didn’t know how to deal with it at first.

Being married 50 years gives you patience. You don’t overreact to the little things. Maybe I’m fuss-budgety, or Mom’s crabby. We get that about each other, and let it pass. Whereas, earlier on, we’d have argued about what had been said rather than the mood that created it, which was a total waste of time. But, as the years go by, those kind of bumps get smaller and further between.