Before you think I’m a fugitive (I’m not) and you need to call your local authorities (you don’t), the only running in my life is the kind where I commit myself to weeks of trying to get better putting one foot in front of the other at a pace slightly faster than walking. Why? Because there’s bling at the finish line and a tee-shirt to prove that I showed up.

Yes, I am one of those people – the type who craves getting out of bed early on a Saturday morning to see the sunrise  on the running trail. To be alone, with my thoughts, nothing but the pavement in front of me and a handful of other runners and cyclists passing by, trading smiles and waves with those who also totally get it – few things in life are better.

I wasn’t always this way. I was far from athletic in high school and college. But as I started working full time in my 20s, I needed something to escape the daily grind. I tried all sorts of workouts, but nothing really stuck. At some point, a friend had a crazy idea to run 13.1 miles at the 2011 St. Louis Go! Half Marathon. 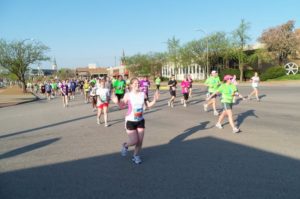 I decided to take on the challenge with her. After all, I was single and had nothing better to do (I don’t even remember what that’s like anymore!)

After I finished that race, I vowed to never run again. And I didn’t. For a little while, at least. Close to two years later, I was newly married and in that post-wedding “what now” phase. I opted to put my running shoes back on and give it a go.

In the fall of 2013, I made my triumphant return to 13.1 miles at the MO’ Cowbell Half Marathon in St. Charles, and continued to sign up for races. It’s a vicious cycle once you get sucked in.

I ran probably 10 half marathons in multiple states, along with countless 5ks, 10ks, Turkey Trots, charity runs, as well as mud runs, runs where I would be stuck in a van with friends (or strangers who became close friends) for hours (or days) at a time, and even dabbled in triathlons. I was obsessed with keeping my body on the move. I loved putting my mind and body to the test, feeling physically strong, and competing against myself. 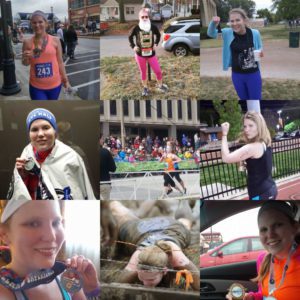 husband and I decided to add a future runner to the family in 2017. I had every intention of being one of those pregnant ladies who ran during pregnancy, but that just wasn’t in the cards for me. Kudos to those mamas who can keep it up, but I quickly learned my body wasn’t going to play along with that. So, instead, I walked a lot and managed to keep active through Orangetheory Fitness until I was about 8 months pregnant. I will say that even though I was a huge pregnant lady by the time I hit 39 weeks, I felt good – and I credit my dedication to exercise.

So, here we are now. My baby is 9 months old and I’m finally getting to a place where I can figure out how to squeeze in workouts and runs between everything else in life. My daughter sits comfortably in the jogging stroller and seems to tolerate, if not, somewhat enjoy the early morning sunrises with me.

It’s still takes time to get comfortable pushing a stroller when running. Even with one of the best jogging strollers on the market, getting your stride takes patience, but we’re figuring it out and making good progress. But best of all, I’m feeling great and strong again.

In October, I will yet again make my return to the 13.1 mile distance at the 2018 MO’ Cowbell Half Marathon.

By that time, it will be 2 years since my last half. Until then, I have a few months of training ahead of me, and I can only hope to keep up the progress I’ve made with my daughter in the stroller ahead of me. I don’t expect a record-breaking finish time in October, but I do anticipate an overwhelming feeling of accomplishment that I will be able to get myself to the finish line a couple days after my daughter will turn 1.

I can’t wait to get back out there on race morning!