For someone who never planned to have kids, it’s pretty surprising to think that I’ve been breastfeeding my baby for almost 6 months now. It’s not that I didn’t like children, in fact that wasn’t it at all. I liked kids so much that for 3 years in college I worked as a summer camp counselor at an all-girls camp in upstate New York. I just had always figured that I couldn’t have both a career and a child. I assumed that if I had a child, I would lose who I was as a person and never again get to enjoy things I dearly loved, like travel, going to see live theatre, and spending a little time alone. Fast forward to now, and I’m not only a proud mom, but a proud breastfeeding mom. These two badges that I now proudly wear would have surprised the younger version of myself immensely.

Much like my incorrect assumption that a child would steal my freedom, I also incorrectly assumed that “breastfeeding is easy because breastfeeding is natural.” Boy was I wrong. Not only have I learned that breastfeeding is a challenge, but I’ve learned that conquering breastfeeding was all about the art of letting go. Letting go isn’t something I do well. I’m notorious for not ever wanting to relinquish control (just ask my husband) and I’ve always been a very anxious person because of this. When I was faced in the early days with a baby who struggled to latch, my overwhelming desire was to either quit breastfeeding or to figure out a quick fix. When we were faced with the news that our son had a significant lip and tongue tie, we had a tough decision to make. He was gaining enough weight and had enough dirty diapers for us to leave him as he was. However, we were told that getting surgery to revise the ties could significantly improve his ability to latch. I decided to let go of a situation I couldn’t truly control and my husband and I decided it was time to do what we hoped would best help our little man in the long run.

It was very difficult to watch the doctor do the surgery (my husband had to leave the room), and it was even harder to see our son with a bloody mouth as he cried after the procedure. When we got back home and realized that he was immediately able to latch easier, we immediately knew we had made the right choice for us.  The cracked and bleeding nipples, the hours of a baby screaming due to being hungry and unable to latch well, and the severe anxiety I had felt during all of these struggles had washed away with a few simple snips. 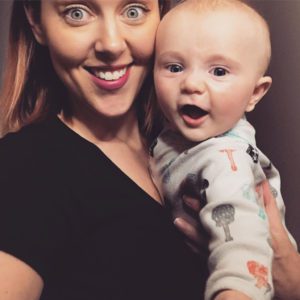 If dealing with breastfeeding “hiccups” has taught me anything, it’s that the best route is to let go and give in to the reality that nothing is ever perfect. My son is about to turn 6 months old and we have been successfully breastfeeding since his surgery. He is happy, healthy, and has some thigh rolls that would give the Michelin Man a run for his money. I have found an amazing breastfeeding support group online and also had incredible experiences at the MoBap breastfeeding support group. My challenges aren’t over though. I deal with breastfeeding issues even now, like a bout of mastitis and my milk supply dipping after taking antibiotics to clear the mastitis up. Just when I think I’ve got this whole breastfeeding thing figured out, a new issue may pop up, but I take a deep breath, I look at my son, and I let go.  I let go of expectations, I let go of judging myself, and ultimately by doing this I give my son the best version of me. It’s pretty funny how I thought that having kids would make me lose myself, when in reality, having my son has helped me truly find myself.

Cassiday is 1/3 of the morning show Spencer’s Neighborhood on 106.5 The Arch and is the co-host of the podcast Babies and Beer. In February, she give birth to her first child live on the radio and life has been Crazy ever since. She is a Kansas City native who recently made her way back to the Midwest by way of Texas, North Carolina, and Georgia. She has been with her amazing husband Jerry for almost 10 years.