There is nothing cooler in my opinion that being able to speak two languages. When I was pregnant with my daughter, the plan was always for her was to be bilingual. Her dad is a native Spanish-speaker and I am a high school Spanish teacher, so her being able to speak Spanish as well seemed like a no-brainer. And even though most life plans don’t always work out, this one actually did. We spoke Spanish at home, and she learned English outside of home. I won’t nerd out and get into all the details of second language acquisition, but like magic, she was able to speak two languages. It was the most amazing thing to watch my daughter say something in Spanish to her dad, and then turn and say something in English to her grandpa. But then at the age of 5, her dad moved away and was no longer a part of her life. She stopped wanting to speaking Spanish with me, she stopped wanting to speak Spanish in general. It was like, when she lost her dad, she also lost her Spanish… and it broke my heart. But I have always felt that as a mom, you have to pick and choose your battles, and I decided not to push the Spanish thing. Some people made comments about how I should keep speaking to her in Spanish, but I think deep-down, she associated Spanish with her dad, and I didn’t want to make that situation any more traumatic than it already was. 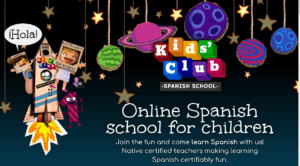 Fast forward 2 years, and she is 7 now. Within the past few months, she has shown an interest in speaking Spanish again. I would try and speak with her like normal, but she had just lost so much, and would easily become frustrated. I knew she really needed to start over from the beginning, so I decided to look online for a fun, engaging Spanish-language program for kids. I know there are options here locally, but the appeal of her being able to take her Spanish class at the kitchen table while I was cooking dinner for instance … well that seemed too good to be true! I looked into some different companies, and ultimately went with Kids’ Club Spanish School. They offer a free trial class to try out the program, so we decided to start there. You can either choose the teacher you want and look at their available days and times, or you can search by the specific day and time you want to take the class – and then see which teachers are available.  The class is one-to-one with a native Spanish-speaker. Imagine skyping with someone, but you were also able to both look at the same powerpoint presentation being displayed. Our trial class, which is based on a beginner-level immersion experience, went really well – my daughter was a little shy at first, but she quickly warmed up and was laughing and speaking in Spanish for the rest of the 25 minute lesson. Since the first class went so well, I bought a package for 10 more lessons, which we just finished. She has really enjoyed her Spanish lessons, and looks forward to them. So far we have tried 3 different teachers, both male and female, and they have all been awesome. I know online learning might appear to not be the most effective, but these lessons definitely work. She has now learned, and has been able to retain, basic beginner Spanish including greetings and introductions. I am excited for her to continue with the program, and will be buying our next pack of lessons soon!  It’s not the most inexpensive extracurricular activity, but seeing her enjoy Spanish again, listening to her speak Spanish again – that’s priceless.