I am 100% convinced that kids (and their grown-ups) do better when they get outside more. In my particular circle of homeschooling peers, this is a common tenet of educational philosophy that’s backed up with lots of scientific and psychological research.

But being convinced hasn’t translated into actually, you know, doing the thing. I’m having a hard time putting my finger on why.

You might blame my urban living, but I don’t think it’s that simple. While, yes, it was easy for me as a rural child to simply go romping through the woods in my backyard, today’s division isn’t a simple geographical one. Urban kids of the past played outside, too, and not just in well-designed parks (though those are great!). They played in alleys, walked the sidewalks in their neighborhoods, and made use of the outdoor space around them.

I’m within walking distance of at least three great parks (including the lovely Tower Grove Park). We’ve also set up our backyard with a sandbox and a climbing dome, and I’ve got a big deck. I just don’t think it’s my urban location that keeps us indoors more than we’d like.

Last year, we participated in the 150 Hours Outside Project, and we made it—barely! The idea here is that you commit to getting an average of about 25 minutes a day outside every single day. That’s about 12.5 hours a month, and it doesn’t sound hard.

But I have to confess something: we haven’t been getting 25 minutes a day. We’ve got a lot of catching up to do.

Some of it is the weather, so I made sure that we all had boots, rain jackets, gloves, and snow-friendly winter gear.

Some of it is the general busyness of life, so I’ve tried consciously to schedule a few hours a week to go outside.

Most of it, though, is simply the drudgery of trying to get two little people (well, it’s really more like one little person and one medium person these days) out of the house. 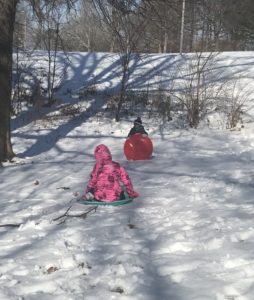 But it’s work getting everyone dressed and properly snack-filled, and then undressed because they forgot to go to the bathroom, and re-dressed and out the door. It’s often a towering mountain that I don’t feel equipped to climb before the dwindling twilight hours of post-Daylight Saving Time in Missouri vanish each evening.

We’re going to keep trying, though. Hopefully, some sunshine (and mud pits) and blooming flowers (and rainstorms) and earthworms (and freak ice storms in April) will make it all a little easier soon. 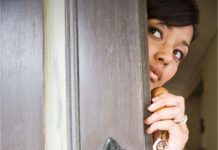