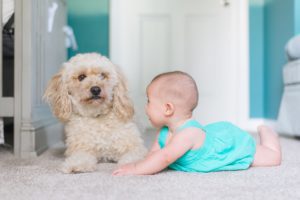 When I see those cute photos of children piled on top of the family dog, I cringe a little. Did you know dogs don’t actually enjoy hugs or being patted on the top of the head? While some dogs can be conditioned to tolerate it with grace, others cannot. Or, they might accept a behavior from their favorite adult human but not the small ones in the family. While I agree that it’s important to acclimate a dog to human touch, I think it’s equally essential to acclimate our tiny humans to appropriately interact with their canine companions.

In November 2011, my husband and I brought home our first baby, a miniature schnauzer puppy we named Eli. 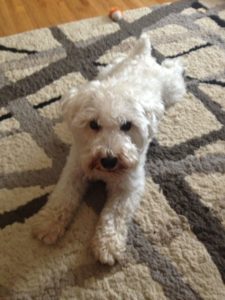 Little Eli went to both basic and advanced training classes, where he was a star pupil (whenever treats were involved). We spent time at home getting him accustomed to having us pick up his paws, touch his ears, brush his teeth, etc. if for no other reason than to make vet and grooming appointments less stressful for him. Eli grew to be a confident, outgoing little dog who loved to snuggle with his humans. 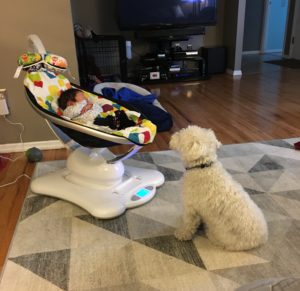 When we brought our first daughter home in 2016, Eli was wary at first but generally accepting of the new addition to our family, content to cuddle up with us in the rocking chair while I fed the baby. In 2018, he got yet another human sister. As each of our daughters has become mobile and active, we have started training them as well. Here are a few key ways we’ve trained our kids for their safety as well as Eli’s comfort and happiness.

*Please note, I am NOT a training professional, just someone sharing my experience and what worked for us. 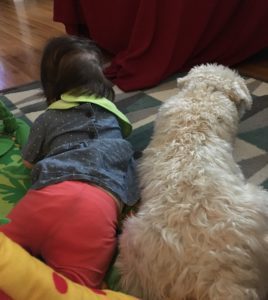 When my daughters started crawling, pulling up, and walking, I made sure to always be in the mix when they and Eli were on the floor together. While I love and trust Eli, any dog—yes even your beloved family pet—can get triggered or pushed too far. Until each of my daughters is old enough to know how to interact with the dog, I will not leave them alone in reach of each other. Baby gates, play yards, and the dog crate are utilized as needed when I’m too busy to supervise.

I started very early with my daughters teaching them “gentle touch” while helping them stroke his back, rather than grabbing fistfuls of fur or pulling on his ears and tail. At the same time, I tell him what a good boy he is and give him treats to help him associate time spent with this tiny humans as positive.

I keep them away from his food and water dishes whether it’s feeding time or not and they are not allowed to play with his toys. While Eli has never been food aggressive, he is really, really possessive of his favorite toys. My older daughter is now allowed to help feed him, and she knows how to safely play fetch with him but to never take a toy away from him unless he drops it for her.

When my older daughter was learning to walk, one day she fell down against Eli. He whipped around 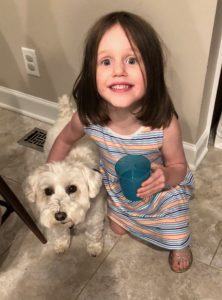 with a low growl. I was panicked until the trainer we worked with helped me see the growl for what it was—a warning. He could have snapped at her, but he didn’t; he was telling her (and me) that he’d had enough. Now that my younger daughter is unsteadily walking, it’s more important than ever for me to stay involved and above all respect Eli’s limits.

Rule Out Illness or Injury

I also want to point out that if a dog starts to show signs of irritability, it’s important to have a vet check them out for potential illness or signs of an untreated injury or condition like arthritis. We discovered that Eli’s allergies made it incredibly uncomfortable for his back to be touched. With proper treatment, he has become much more tolerant. 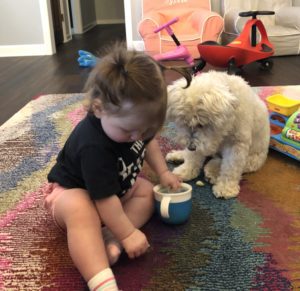 Today both girls have a pretty good relationship with Eli, except for his propensity to steal delicious foods right out of their hand if they aren’t paying attention!