St. Louis is unlike any other city when it comes to baseball. Most major markets like Los Angeles/Anaheim, Chicago, or New York have two teams that split their towns when it comes to fans. Our mid-market team has a big city love that can hardly be rivaled. As the holder of the second most World Series Championships, our Cardinals and our fans are so unique. I remember in 2011 when the Cardinals were in the World Series; you couldn’t drive around St. Louis, especially downtown, without knowing that the Cardinals were tearing it up on the field. The fountain in Keiner Plaza was red. There were massive banners on buildings. Anywhere you went, people were wearing Cardinals hats, shirts, polos, or scrubs. As a Cardinals fan, it makes you proud, and it gives you goosebumps to be a part of Cardinal Nation.

For as long as I can remember, I have been a Cardinals fan. I was born in Jefferson County, just south of the St. Louis county line. I was in Cardinals country. My earliest memories of the Cardinals were of Ozzie Smith doing backflips across the field. There was a parody of the popular dance song, “The Macarena” called “The Tony LaRussa” about the Cardinals. If you missed that gem, you can find it on YouTube. The home run race with Mark McGuire was a huge part of my childhood. It has always been exciting to be a Cardinals fan.

Fast forward to college, and I meet this young, handsome Yankees fan. He told me that we would be just fine because our teams were in different leagues. It wasn’t like he was a Cubs fan. Our kids could love both teams. Our kids do love both teams. Our daughter, who is seven, loves the Cardinals and the Yankees. Our middle son loves going to games. Our toddler proudly wears the Cardinals gear that his mommy dresses him in.

The best way to make a fan is to take them to games. Thankfully, we have friends who so graciously give us tickets every year, and my husband takes our kids to a back-to-school game every year before school starts. Our daughter’s first game was at 2-years-old, our son’s probably at one, and our youngest hasn’t been yet. Yes, they ask for snacks every 5 minutes, they visit the bathroom more times than they have in a week, and they tell us that they can’t possibly handle the heat. All that to say, when Fredbird appears or when the fireworks go off after a home run or Yadi comes to the plate or even when the Budweiser Clydesdales come on the big screen and “Here comes the King” starts to play, magic hits. They get a glimmer in their eyes that could rival Christmas morning. The love for the St. Louis Cardinals has started, and this mama could not be happier. 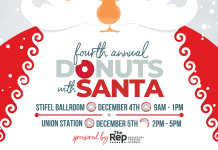