At the age of 36, I became a dog person. I didn’t mean for it to happen. It just happened. I was strictly a cat person my entire life. I can’t remember a time when there wasn’t at least one furry feline in my household. Cats are just so self sufficient and small and loveable. There were so many things about dogs that simply made me cringe. From dog slobber to having to pick up dog poop, nothing about dog ownership sounded appealing to me. That was, until I met “Dolly”. 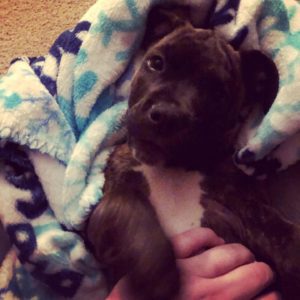 “Dolly” was a 7 week old puppy with a beautiful brindle coat that is brown and gold. Initial determination was that she is and American Bulldog mix. We met her at an adoption event at a local Fall Festival celebration. We definitely weren’t looking to adopt a puppy. Afterall, life had just started to settle down after our 3 year was no longer considered a “medically complex” child and now considered a “normal, healthy” but terribly sassy child. There had been conversations about a puppy but it wasn’t necessarily an immediate decision we thought we would be making.

We have had our new puppy for almost 2 weeks now. My oldest daughter was given the task of choosing a new name for her (Dolly just didn’t fit her personality). She is now known as Izzy. While Izzy is ridiculously cute, she is in many ways similar to a potty training 2 year old. This got me thinking about ALL of that ways a puppy is like having a toddler/child.

While many days I question if I am absolutely insane, I know that this stage will only last a short while. Our kids are generally well behaved so there is a chance we could raise a puppy pretty decently too. I love seeing them interact with each other. This has definitely been an adjustment period for all of us but soon we will fall into a new routine. My girls will be best friends with Izzy. She will grow to be their protector and side kick. As for now, we will continue to go through these growing pains together. Izzy is part of the family now and we couldn’t be more excited to have crossed paths with her on a family outing on a beautiful fall day. 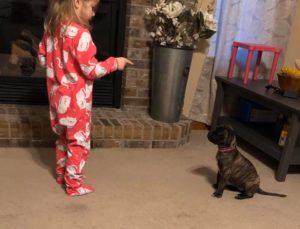 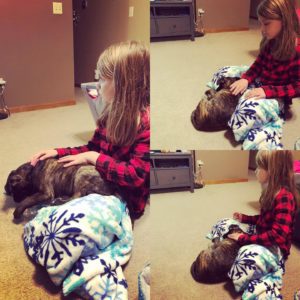 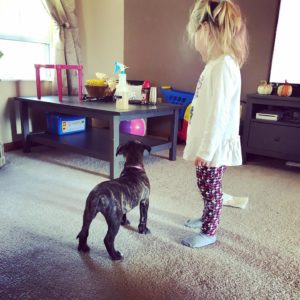