I am a white mother to two little black boys, and often my fears about where we are as a nation in 2020 feel suffocating. Martin Luther King Jr. spoke with sheer urgency at the March on Washington, the same urgency that I have as a mother today. As foster children, my boys already have what seems like an insurmountable mountain to climb. Their trauma alone raises their risk for mental illness, addiction, and incarceration. Their trauma compounded with being black men in this country is hard to fathom.

In 1963 Martin Luther King Jr. proclaimed the famous words, “I have a dream that my [four] little children will one day live in a nation where they will not be judged by the color of their skin, but by the content of their character.” Now, 57 years later, I have that same dream.

I have a dream that one day my boys will know that they are loved beyond measure, that the color of their skin ties them to a history of strength and persistence that no doubt they carry. I have a dream that our community and neighbors will see my boys as I do, as kind, resilient, and curious children. I pray that my boys’ past will be just a part of their story, but will not define who and what they have the potential to become.

I have a dream that in a city so racially divided, my boys will be advocates and bright lights for those boys and men that have faced injustice. I have a dream that they can see the promises of democracy that King highlighted as foreign to so many. I pray that my fears as a mother to black boys, teenagers, and then young men diminish. I dread the realities of the conversations that we have to have based upon their race. I dread the looks that we often get in public places. I dread them ever feeling less than because of the color of their skin. 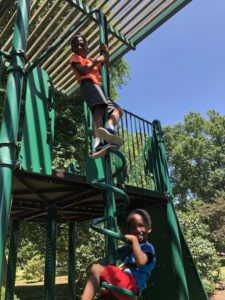 I am acutely aware that as a mother, I mess up numerous times a day. These conversations are not easy ones to have with children, but not to have them would be a colossal mistake. As their mom, I have to acknowledge what is; I have to admit that how they perceive the world and how the world perceives them is radically different than my own experience. Dismissing both the overt and covert systems of racism that still exist in our country does nothing to help my boys. I will continue to advocate and dream big for them.