Looking for ideas for a colorful playroom for your little ones?  Look no further! No detail was overlooked in this artfully inspired space! 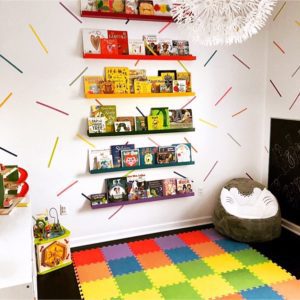 When people say that you shouldn’t make any major life changes with a newborn, especially as a first-time mom, I am here to tell you they are not playing around. That should not be taken as merely a suggestion, but as something you should definitely take a hard pass on.

I heard these suggestions, but the problem was our son was born in October, and our lease was up in February. We had been saving to buy a house, so we took the plunge and bought one in the same city as our parents, in January, which was also the same time I went back to work.  And because I apparently think I am superwoman, we bought a house that needed renovating to the tune of ripping up all of the carpets and painting everything on the main floor… and doing it all ourselves. One of the small silver linings of having to shelter in place has been that we have had more time to work on our home renovations.

When it came time to decide which room to start on, I immediately went for the playroom, because what better way to add some cheer to otherwise stressful and anxiety-ridden days than to work on a fun, colorful playroom. I wanted the room to have a theme, but just a slight one, so that it left room for imagination and creativity of his own once he’s older. And what better theme for creativity than the colors of the rainbow!

The room started with the idea for the washi tape, with small haphazard strips all around, sort of like candy sprinkles. Washi tape makes for fabulous wall art because it’s easily removable with no mess. Next came the book ledges. I had been pining for them online for a while, but they cost an astronomical amount.  Then this easy DIY tutorial from At Home With Ashley made my rainbow book ledge dreams come true. We used acrylic paint from Michaels. We cut the 8 foot boards in half to make 4 foot shelves. The 4 ounce paint tubes were enough to cover the shelves in two coats. To finish off the reading area, I found this cute shark beanbag at Target. They also have a pink bunny version. The light fixture is from Ikea, and the playmat is from Amazon.

We used contact paper for the chalkboard since it was removable, but I wouldn’t recommend it. It was really hard to keep the air bubbles out when applying it, and it ripped once you wrote over the air bubbles, so we will probably just remove it and replace it with a small chalkboard that’s screwed into the wall once he’s old enough to use it. 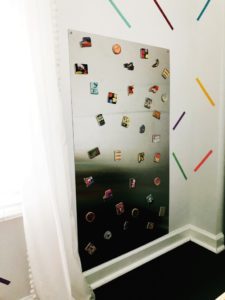 I researched chalkboard paint that is magnetized and found that it doesn’t really work well, so instead, we used a piece of stainless steel backsplash anchored to the wall for the magnet board.

Being a big proponent of exposing kids to adult art at an early age, I couldn’t pass up these Warhol magnets. However, they were much smaller than I thought once I got them, so they’ll end up back in the closet until he’s a bit older, and they are less of a choking hazard. We have some larger alphabet ones that will replace them. 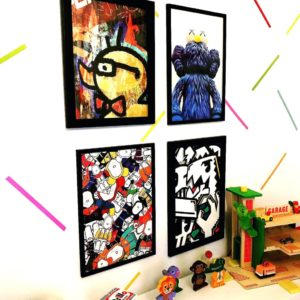 For the art, I went with adult pieces with kid-friendly themes. We have a lot of street art referenced pieces in our house, so these complemented those. The Cookie Monster Kaws photo is a reminder of a date night we had to the Contemporary Art Museum to see his work. All artwork is from Society 6, which is a great online art source ( dinosaurs, bears,  ducky ).  The custom size frames are from Amazon. 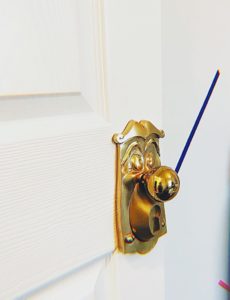 Last but not least, my favorite piece of the room, this Alice in Wonderland themed doorknob plate went perfectly with the existing doorknob. Here’s hoping our little guy has just as much fun creating in the space as we did creating it for him (and that someday soon I’ll stop craving ice cream every time I’m in there) :). 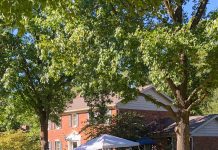 Community: Our Non-Negotiable When Moving 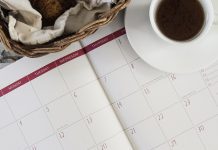 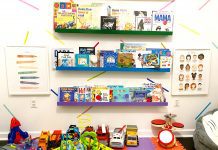 Favorite Artists for Kids’ Spaces and Beyond