We talk about Santa in our house kind of like most people talk about Daniel Tiger or the Little Mermaid. It’s always been that way. Our daughter has never believed in Santa Claus, the Easter Bunny, Tooth Fairy, etc. It was a conscious parenting decision we made early on, and I must admit, it has been a freeing experience!

I remember being around 7-years-old, seeing my parents go through such lengths to keep my siblings and me believing that Santa was real. We would go to bed with no gifts under the tree with the expectation to wake up and see a miraculous pile of wrapped treasures the next morning. I would stay up late in anticipation on Christmas Eve, peeking out of my bedroom window, hoping to catch a glimpse of a sleigh shadow or at the least hear reindeer prancing on the roof.

“But how does Santa know where we live when we don’t have a chimney?” I would ask.

“How can Santa go around the world so fast?”

“Does Santa speak every language in the world? … How?”

There was always an explanation.

I don’t know how or when I found out Santa wasn’t real, but I remember being asked to keep the secret for my younger siblings as not to “ruin it” for them. I don’t know if I was disappointed or relieved because the whole thing never made logical sense to me, but I do remember the revelation that startled me the most: my parents were capable of lying to me, and they were good at it!

We wanted to do it differently with our own children. It was something I felt strongly about, and I knew it would be hard at times. Some friends argued that our children would be missing out on the magic of the holidays and that somehow by not lying to them from birth, I would be robbing them of the mystery and excitement of childhood. I’ve found that not to be true at all. In fact, keeping things real with my daughter has become our normal – in all areas.

When she opens her gifts on Christmas day, they’ll be labeled, “from Grandma, Mom & Dad or Uncle, etc.” We believe that we’re teaching her early to be grateful for what she has and be thankful to those who bless her. There’s nothing mysterious to her about the fact that things cost money and money doesn’t fall from the sky. We also have open conversations about earning what she wants through practicing good behavior, being kind, considerate, and giving. We adopt a child every year for Christmas, and she picks out their presents with the understanding that their parents can’t afford to buy them, so we do our part to be good helpers.

We watch all of the Christmas movies, drink hot chocolate and talk about the North Pole and laugh at how the Easter Bunny is a person in a costume. She wonders how many elves Santa has to have to make so many presents. She enjoys the theatrics of it all, and it amazes her even though she knows what happens behind the scenes. We talk a lot about what’s real and what’s make-believe.

Yes, my kid is the one who will likely spoil it for that child who still believes. But I figured it would be easier to do it this way. I never have to be fearful of the day she “finds out” or grief when she outgrows the myth. This way, there’s nothing to re-educate her about later. 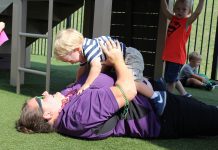 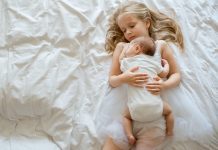 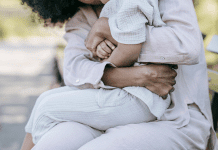